Well... I'm finally a member of the cool kids club, either the 10mm gang, red dot on pistol gang, or both lol. Yep, finally got me a 10mm Glock and finally stepped into the world of red dots on a pistol. I got this on a Blue Label deal at $558 and decided to go with the Leupold Delta Point Pro, mainly due to the large window. Local shop had one for $320 installed, and they used different screws vs. Glock supplied ones, apparently the Glock ones are not the best, but that's another discussion. The pistol... 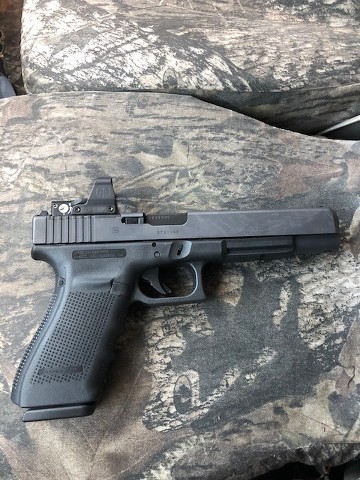 I stopped off at the range and did a 25 yard zero. This pistol will be more of a walk and stalk pistol and I'll have it in the stand as well with shots limited to about 35 yards +/-. I used PPU 180gr JHP's for the hunt. I am collecting brass and have 200 Hornady 180gr XTP's to use later on.

I spotted a hog in the marsh so I parked and made a 150 or so yard stalk. It was easy going and open pasture with oak heads and palmettos. Got to the edge of the marsh and there were at least three hogs. I waited for a good shot, about 20-25 yards, and hit her hard. She ran towards me struggling and instead of letting her close the gap, I fired... a miss... she passed by at about 10 yards and the third shot rolled her. 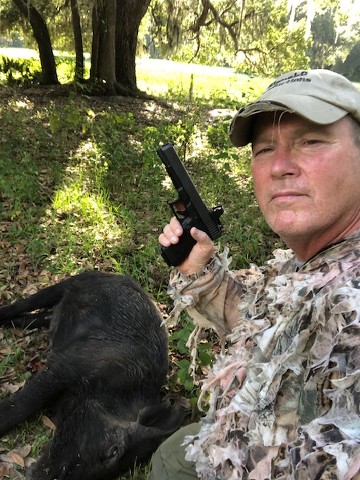 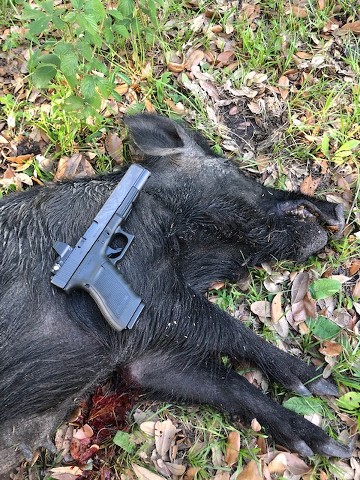 A smaller red pig came running up and stopped about 15 yards... a single shot anchored it but it needed a final up close Coup De Gras sealed the deal. 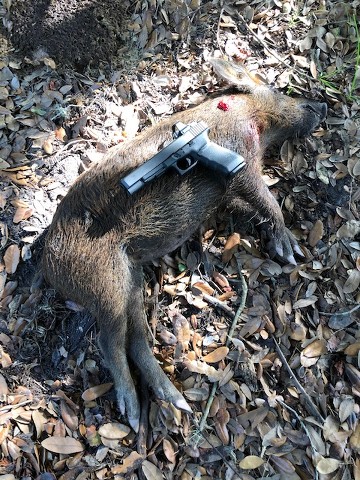 I moved on to another field and saw several hogs. I parked and used the trees to mask my stalk, I got to within 20 or so yards and fired... I anchored one and when another one ran a few feet and stopped, I anchored it as well... or so I thought. In error I turned my attention to other hogs and then realized one of the previously hit hogs was on the move... but barely. It got to the tall (5') grass at the edge of the marsh and I caught a glimpse... I fired and it ran deeper into the marsh so no recovery. I looked around some but no luck. 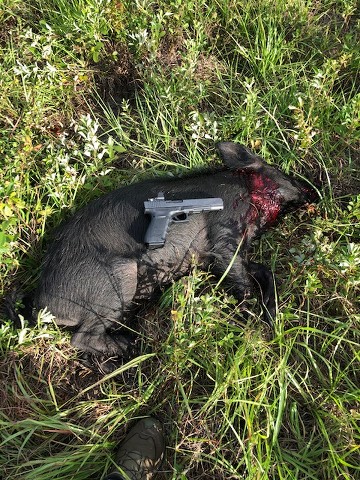 So... lots of fun stalking up on the hogs, I do the same when shooting .300 BO subs. Like the .300 BO, you got to hit em square or be ready to shoot again or track em. Of course the factory ammo is not as hot as the 10mm can be, but the ammo did the job when I did mine.

After a day with the red dot, I'm able to pick it up quickly. Very satisfied overall.
N

Congratulations, looks like a good time. Were ya solo or did you have backup?
I've got a G20 with 9 inch barrel I'd like to try out.(with brace an dot) Any shoot thru or did they expand and stop?

Rebel_Rider1969 said:
Congratulations, looks like a good time. Were ya solo or did you have backup?
I've got a G20 with 9 inch barrel I'd like to try out.(with brace an dot) Any shoot thru or did they expand and stop?
Click to expand...

Solo... no pass throughs that I'm aware of... really didn't look that closely at them.

Bowhntr6pt said:
Solo... no pass throughs that I'm aware of... really didn't look that closely at them.
Click to expand...

I've got a box of the hard cast stuff that's supposed to work well. 200 gr. Look forward to trying it as well, supposed to be "the round" for hogs.