Let’s see your old single barrel shotguns, there’s nothing more American than the old single that everybody’s ancestors used to put food on the table with way back yonder, squirrels, rabbits, possums, coons, etc.
Here’s an old Stevens model 940E in 410 that I bought long time ago and then gave it to my son when he was a little boy, it’s still at my house and he’s 32 years old now and lives 2 hours away, lot of memories with this little 410, would you believe I bought it for $40 many years ago.

Mine was an old beat up Iver Johnson's Arms & Cycle Works Champion 12 gauge with a 32 inch barrel. It was bought second hand by my Great Grandfather, which in turn was passed on to my Grandfather, Father, Me, my oldest Son, who will give it to his son.

The 3 areas where the SN are stamped are matching, and all the parts are original. She ain't pretty but I was told it wasn't a show gun, but a working gun, and such it was meant to put food on the table, and keep thieves out of the garden, barn, and fields. Which it did for many years. She still gets shot now and then, and it was the first gun all three of our kids shot. They were each given a box of shells and told to empty the boxes.

Based on the Alpha SN it was made sometime between the 1940-1956. For guns made during this time period by Iver Johnson the formula for figuring out the SN is pretty easy. 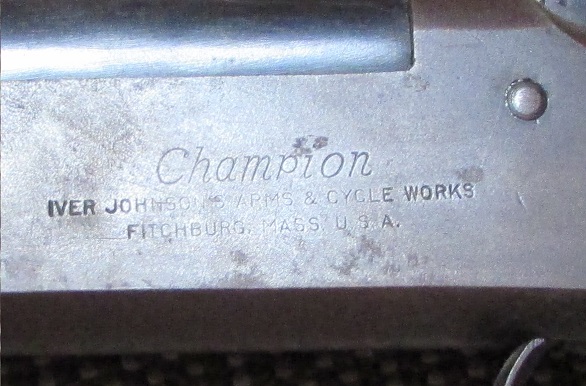 Haha, great story Sarge !
Nice looking old single barrel, I like the character of an old worn single. I remember going deer hunting with my grand parents, my mom’s folks, and granny killing deer with an old single barrel Winchester 20 gauge, my granny was a tough old gal. All of their folks dog hunted back then, I don’t have granny’s shotgun , one of my cousins inherited it. I do have my granddaddy’s double barrel 16 gauge Stevens 311 that he toted.

Drove down to Milton last night and met the “fla kid” and picked up this old 12 gauge from him, nice old single barrel with lots of character, if it could talk it could tell lots of stories I bet.

I have a NEF 12ga that was chopped from "too damn long " to 18.5 inches back in 1993 or so.
I carried it while scouting the river swamps of EscRvr WMA and Eglin prior to the opening seasons.
Short,extremely light,safe to carry with a rd loaded,etc.
I normally had it loaded with a 3" "OOO" buck for those sudden boar hog encounters,then several 1.5oz of #8 shot reloads. Had to kill one in Eglin and one in off the pipeline E of Whites River (WMA).
Chopped singles are easy to sling across your back,easy to disassemble to clean and lube,and safe to csrry loaded. Especially the NEF's with the transfer bar type hammer.
I got mine new for just over a "C NOTE". ---- SAWMAN
ADDED: The cyl bore guns shoot tighter than expected when using any form of buckshot OR large steel shot.
Remmber,your guns bbl length has nothing to do with the shot pattern thrown.
Last edited: Friday at 5:52 AM

This single is not really old, I’ve owned it 30 years now though. It’s an NEF 10 gauge single barrel and it’s killed several turkeys over the years when I first bought it, I remember especially killing two 23 lb gobblers with 10-1/2 and 11 inch beards with 2-3/4 inch spurs with it in back to back Spring turkey seasons, I haven’t Turkey hunted with it nor shot it now in probably 20 years. I was working at Wetumpka AL one morning and saw it on a rack at a Pawn Shop, when I asked about it the store owner said it was practically brand new, said he had sold it as new 3 weeks before and the guy brought it back and said it kicked too hard, he said he’d take $90 for it, I didn’t have enough on me to buy it and went to lunch with my crew. Was telling the guys about it and my crew all chipped in enough money for me to go buy it before we left to come back to Andalusia that evening so I went and got it and payed my coworkers back the next morning for their loan. It doesn’t kick too bad, it’s a heavy gun. Folks have wanted to buy it over the years, just now when I pulled it out is the first time I’ve put my hands on it in probably 15+ years. I like this 10 gauge very much.