So 3 of us planned to be out last night. Sawman's electric buggy died, and Chaps was too tired from other activities, so it was just me. Spent 3 hours watching one farm area (3F) (promised the farmer I'd be out, as hogs had found his peanut field). Nothing, no hogs.

Left to do just a look at another family's peanut field (SW field) and bingo, at 00:15, where I'd recommended Sawman and Chaps sit and watch, just as I walked up, out comes a sounder, led by a obviously bigger hog. Same sounder as I'd killed from previously? Wherever big hog went, others followed. So, they're rooting, eating, and generally going west (adults and little ones). I'm stalking trying to keep up and get closer. Finally the big hog was going west enough that soon it would not be safe to shoot, so it was now or never. Shot and then swung on the rest of them running back east. Picked an adult and fired, nothing so increased my lead and fired, and it did one of those end over end flips and doesn't move. Swing back to the big one, and it has gotten to its feet, so I shoot again and this time it doesn't get up.

OK, go check the end over end hog. Good size sow and shot right in the head. No wonder it did the flip. Luck...I'm not THAT good on running hogs. Go to big hog, expecting a large sow, but it was a boar. I am not familiar with a "lead boar", but all the hogs were following him. Is there such a thing? Took over for the lead sow killed the other night? None of the hogs nor the boar seemed super alert, and the way the wind was shifting, I thought they'd smell me any second.

Pain in the butt to move them out of the field by myself, but it's gotta be done. Trailered up my Mule this morning and got the job done. I have an "elevator" for lifting game up so it can be rolled into the bed. Sow has my hook in her jaw so I can drag her onto the elevator. One of the hired hands of one of the farmers stopped and we chatted a while about the critters and crop damage. The jaw is all that's left from the hog the other night. About 48 hours and they are gone. 16" 300 Blackout, FLIR RS32 thermal, Nosler 125gr BT hand load, Ark30 suppressor. Gonna unload the Mule and wash the hog blood off of it now. 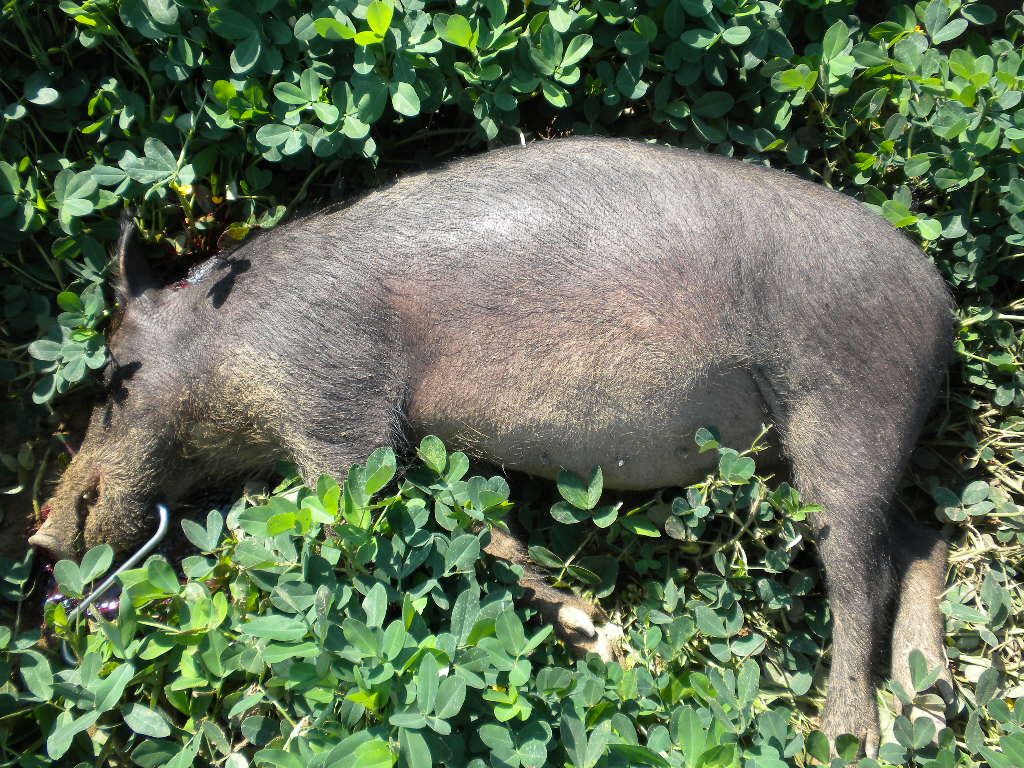 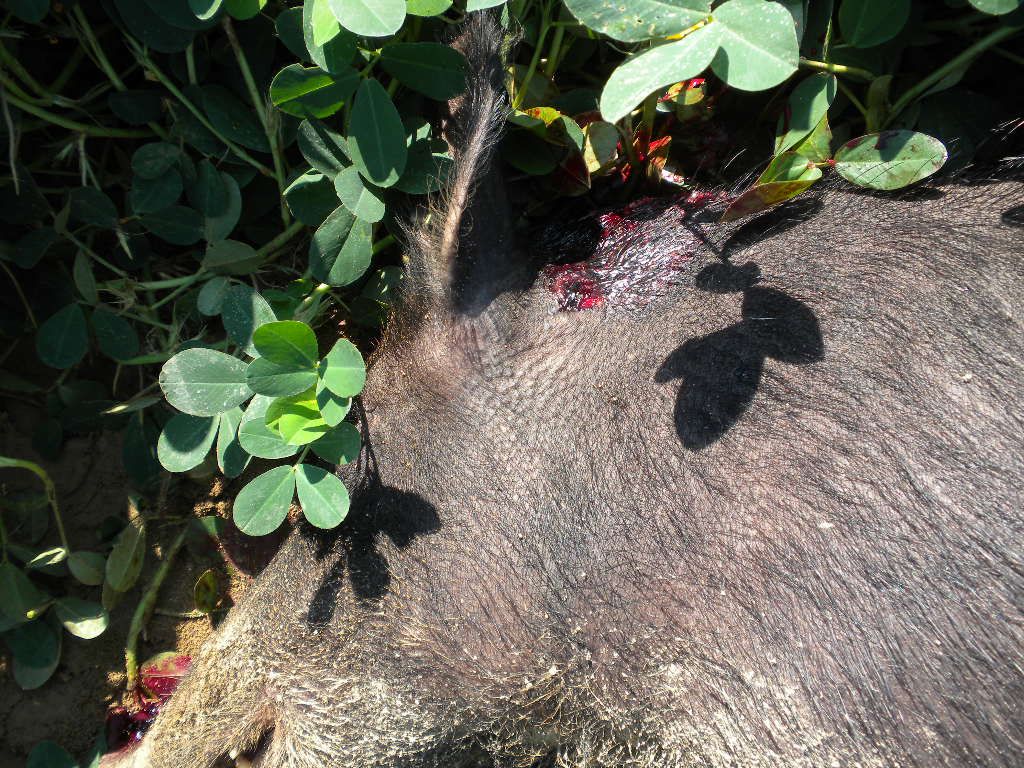 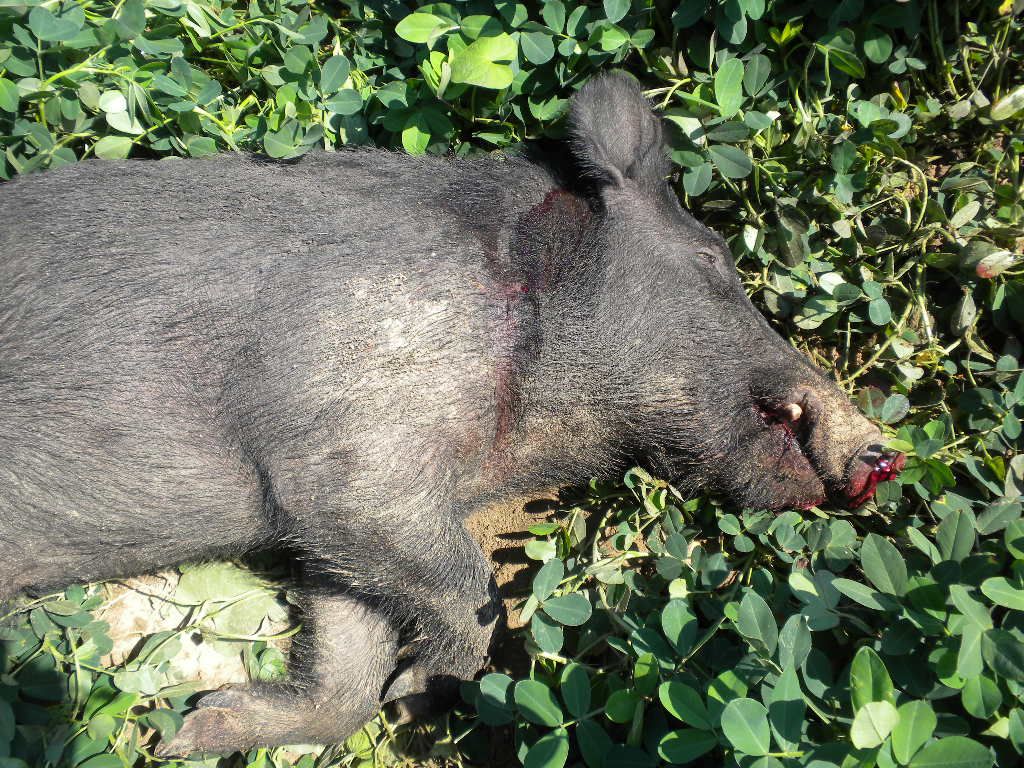 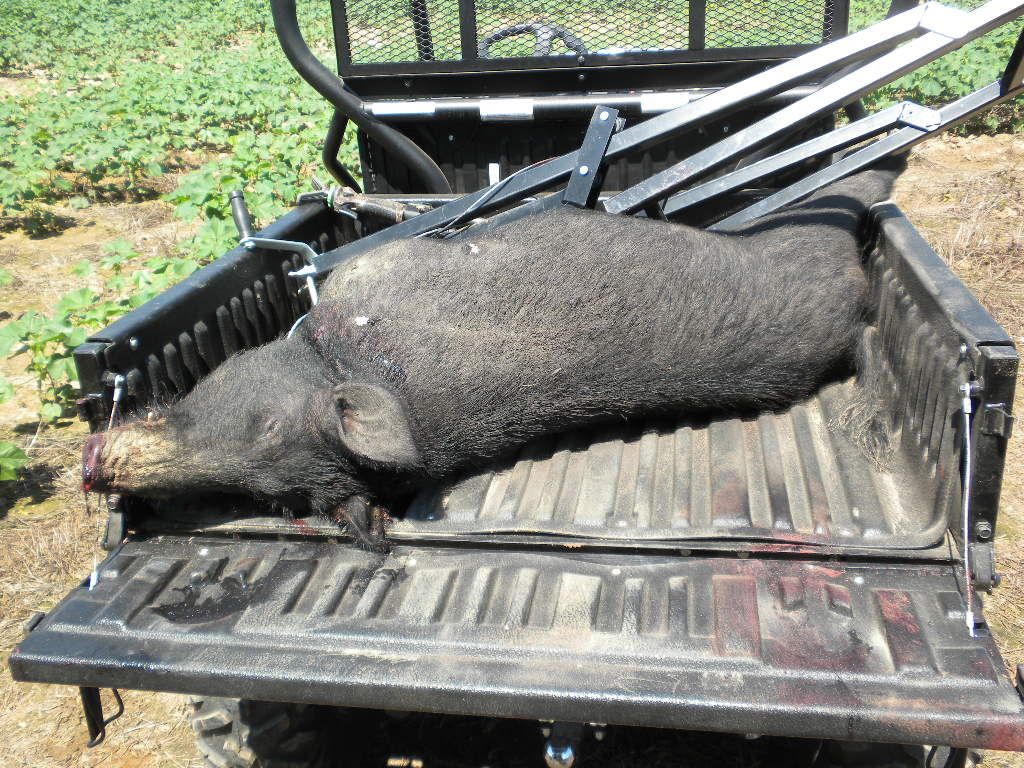 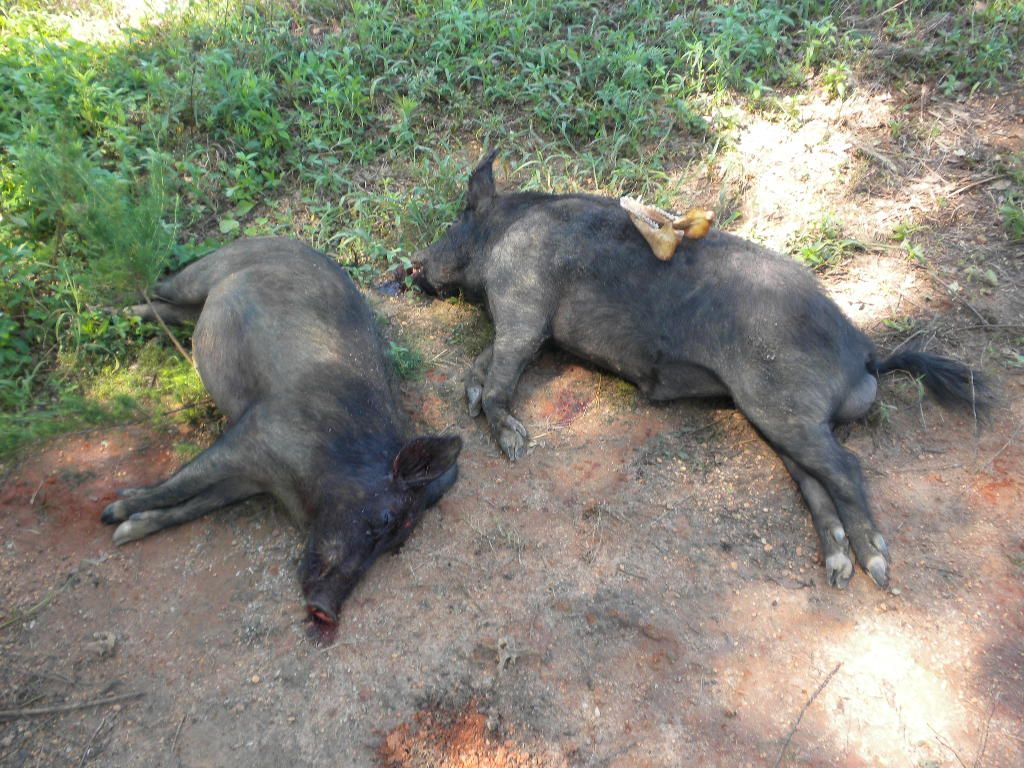 Good job. Hogs that big can mess up a bunch of crops in short order.

They are messing it up. This is the field I’d simply called the owner to let him know about the hogs and without me asking, I was given permission to hunt.
F

One of these days, I hope to whack a piggy with a pistol!! Good job on the Porker!

I have killed them with several different pistols and revo's. Mostly with a Desert Eagle chambered in 44Mag.
I took one in Eglin some years ago with a 454Casull that weighed close to 300lbs.
#1 RULE to hunting hogs on the ground with a pistol - - -> USE ENOUGH GUN !!
For the most part,if you are just strolling thru the thicker stuff,making a racket,they run and/or hide from you. But if you are taking your time,easing thru,making an effort to be as quiet as possible,especially in the fan palmetto's,the bigger dominant bore hogs could mistake you as an adversary. As another dominant bore invading his territory,that needs to be challenged.
In some of the encounters they will stand their ground and be ready to fight. I have been easing down a known hog trail in the swamps,looking in the mud for sign,looked up,and a big bore was just standing there,looking at me. The hair along the ridge of his back standing up like the European Razor Backs. They look at you like you owe them money that is past due. Sometimes they will "false charge" you.
They aren't looking for food. They "simply" just want to stomp,bite,and cut you.
Time for shootin' !!
Take note - - -> in the really thick stuff,if you think you hear a gray squirrel quietly digging for acorns . . . it could be a 300lb boar hog,easing up on you. ---- SAWMAN

I wore my 44 Deasert Eagle,454Casull,and Glock 20 in a chest rig. The holstered gun canted about 45deg to the right side.
NO VELCRO that needs to be torn away loudly. Just a quiet snap. When entering the probable hoggie areas,I would unsnap,tuck strap in back of holster,and draw the gun about 1/4 of the way out to loosen it . . . and for further quietness of the draw. In some cases,if I heard something that could be a hog,I would draw the weapon completely. If it was known to be a hog,I would take the safety OFF.
I have been moving down a hog trail and had them move up to within feet of the trail to see what passes by. I killed a 215lb bore hog off of Canoe Creek (off EscRvr) at about 8 FEET. MY Glock 20 was up to eye level and I was ready to shoot just as soon as my barrel was aligned. NO SIGHT USED.
I put two 200gr WFNGC hardcast in him "really quick". After the shots I took about three small steps backwards and he still sprayed blood on me. ---- SAWMAN
You must log in or register to reply here.
Share:
Facebook Twitter Reddit Pinterest Tumblr WhatsApp Email Link
Toggle Sidebar